Passions inspire the people,
and change the world. 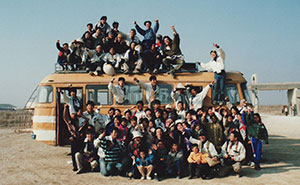 History
In 1992, the University of Kokushikan executed “Dream Planning”. This caught the beginning of IVUSA. “Dream planning” was a plan which the university supported students’ dreams. Students’ dreams were the wide variety of fields, but especially there were many plans they wanted to contribute to society.

Among them, IVUSA was organized by passion like “want to act more and more!” which students who joined “the action to build the elementary school in Laos” and “the action to clean up in Tama River” had.

First, we had started from the University of Kokushikan, but various university students became to know about us by word of mouth and visited us. After that, members in IVUSA increased and the range of action also expanded rapidly.In 2002 May, we got approval of NPO corporation from government in Tokyo, and in 2003 we established Kansai branch located in the University of Ritsumeikan.In 2006, we got the Prime Minister Prize for disaster prevention workers.

Currently, we have 4,000 members included 90 universities, and are the largest student volunteer group in Japan.

Mission
These days there are many problems such as wars, the climate change, the destruction of environment, the gap of poor and economy, and disasters all over the world.
We make use of the neutral position of students, works on solving problems with connecting various sectors, and provide chances to learn through actions for students.
And, we aim for realizing “a society to live together” by making connections with various people in many regions and countries through actions. 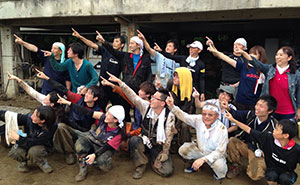 Disaster Relief
Japan is called “disaster powers” because in Japan, disasters often happen. We, IVUSA had done 149 activities for those disasters, for example, earthquakes, Tsunami, heavy snowfalls, eruptions and twisters. We’ve been to east of Japan and Kumamoto prefecture to support a revival from “The Great East Japan Earthquake in 2011” and “Kumamoto earthquake in 2016”.
Moreover, we went to foreign countries to support a revival from six disasters. For example, earthquake in Taiwan, Sumatra earthquake and Indian Ocean Tsunami disaster etc. We went there for 9 times and we made a contribution to revival. 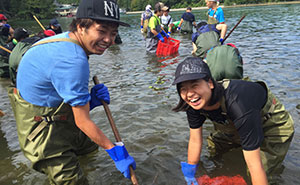 Environmental Protection
IVUSA have been eco activities in Japan, China and Korea. Moreover, we aim to think and understand about environmental problem which is occurred there with local people and students.
In the concrete, we’ve been Lake Biwa in Shiga prefecture and Lake Inba in Chiba prefecture to removal alien species. And we’ve done clean-up activities in Kujukurihama in Chiba, Yamagata and Kyoto prefecture. Moreover we also collect oyster shell in Kyoto and we’ve done the maintenance of forest in Nagano prefecture.

Community Activation
In Japan, decreasing birthrate and aging population cause depopulation in provinces and shortage of successor to farming. IVUSA helped the province’s festivals and made chances an interchange of personnel between us and people who lives in depopulation area. From now on, we will succeed to relate with these provinces and develop new business models in these areas.

Educational Support for Children
There are a lot of problems which are related to children. IVUSA have supported to study to children for their dreams and futures. And we try to cultivate self-esteem.
We’ve done “study support” for poor children in Kyotanabe in Kyoto prefecture and Otsu in Shiga prefecture. And we play with children in orphanage. And we also held sports event and study support and disaster prevention work for children who have mild development disorder. 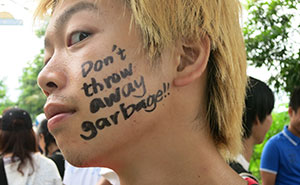 We recommend person with purpose and challenge like these to join the activity of IVUSA
・To do volunteer.
・To make friends in other university.
・To understand social problem more detail than ever.
・To build up communication skill.
・To experience to get job.
・To learn about Japanese culture.
・To get in good term with Japanese.

We are liberal for diversity. In IVUSA, there are variety of sexualities, religions, races, and ages.

【Attention!】We require Japanese skill as far you can enjoy daily life in Japan to attach yourself to work of IVUSA. If you are not confident of your Japanese ability, please ask one of us.

Activities recruiting participants
・Eliminating alien species of water plant in Biwa lake
In Biwa lake, Shiga prefecture, some external kind of water plants have been expanding for several years. These plants disturb the provision of water and fishing industry in this lake. This activity is held in every summer.We recruit participations who are not IVUSA member from this year.

・Removing foreign sort of water animals and fishes in Inba swamp.
Inba swamp which is in Chiba prefecture provide water to residential area. But, recently, a exterior kind of water plant has been growing and interrupting fishing industry. In this campaign, we get rid of the plant every summer. This activity also is available for those who are not in IVUSA.

If you want to register for IVUSA, please send e-mail to the office.
ivusa-office@ivusa.com